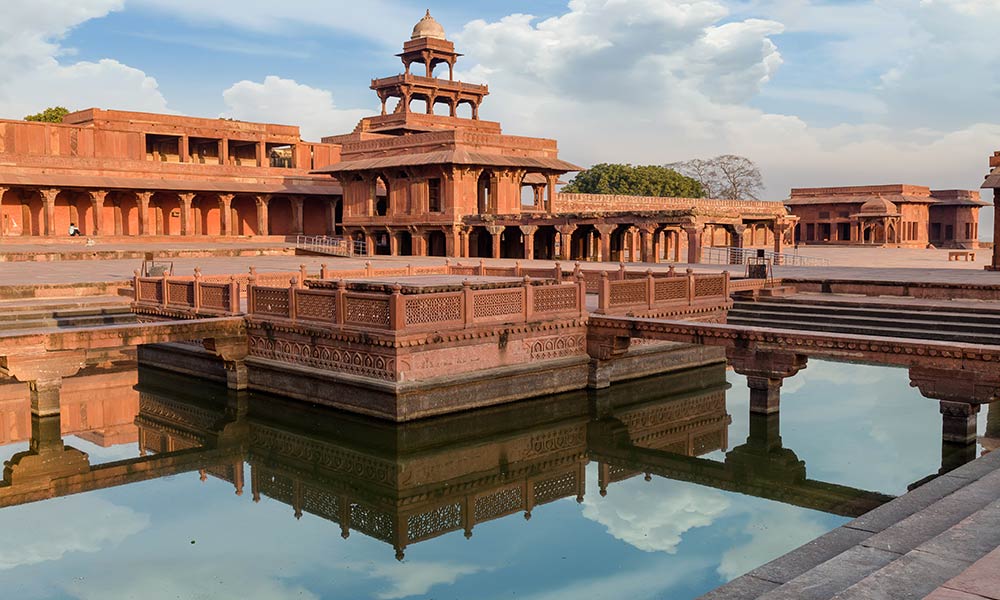 Agra is a city full of spectacular Mughal architecture. The place is also home to one of the seven wonders- the Taj Mahal.  Beyond the Taj Mahal, there are a plethora of other attractions to see in Agra. Whether it’s a family vacation, a honeymoon, a solitary trip, or a group vacation with friends, there’s something for everyone. Whether it’s a romantic stroll through Mehtab Bagh with your sweetheart while gazing at the Taj Mahal in all its splendor or jumping from fort to fort at Fatehpur Sikri while learning about Mughal architecture, one can witness every charm here.

So what’s making you wait? Visit your favorite flight and hotel booking website today and plan your trip to this historical city.

On the banks of the Yamuna River is the Taj Mahal, one of the world’s seven wonders. Shah Jahan, the Mughal Emperor, built it as a tribute to his third wife, Mumtaz Mahal. It also serves as the location of this Mughal emperor’s personal tomb. The Taj Mahal is one of the world’s most jaw-dropping structures, constructed entirely of white marble in the 17th century. Each year, more than half of this city’s population walks through the beautiful gates to visit this incredible edifice!

Fatehpur Sikri, located 40 km from Agra, is a renowned tourist destination in the city of Agra. Mughal emperor Akbar created Fatehpur Sikri in red sandstone in the year 1571. It is essentially a fortified city that was built by the emperor and served as the capital of his empire for fifteen years. The various significant monuments that make up this UNESCO world heritage site include Jodha Bai’s Palace, Jama Mosque, Buland Darwaza, and Salim Chisti’s Tomb. Inspired by Arab and Central Asian tent encampments, the imperial complex is a series of pavilions arranged in formal geometry on a plot of ground.

The Red Fort of Agra was built by Emperor Akbar and is popularly known as the Agra Fort. The fort is made of red sandstone and is situated on the Yamuna River’s right bank. The Mughals’ main residence until 1638 was this medieval fort. It is a UNESCO World Heritage Site and is just 2.5 km from the Taj Mahal.

The Agra Fort, also known as Lal-Qila, Fort Rouge, or Qila-i-Akbari, is a monument that is so massive that it is often referred to be a walled city.

The Mughal emperor Akbar’s final resting place, Akbar’s Tomb, is located in Sikandra, on the outskirts of Agra, and covers 119 acres. It is a Mughal architectural masterpiece that was built between 1605 and 1618. Until his death, Emperor Akbar presided over the construction of this monument, which is entirely composed of sandstone and white marble. Unlike the tombs of other famous Muslim monarchs around the world, Akbar’s Tomb faces the rising sun rather than the Masjid of Mecca.