Discord is widely regarded as the most effective text, audio, and video chat network for gamers, developers, and influencers. Do you, however, know how to screen share on Discord? Discord screen-sharing makes it simple to exchange visual information with coworkers, stream let’s-plays, and interact with other gamers.

You may also use it to share audio and video on Discord. Continue reading to find out how to screen share on Discord and how to broadcast on Discord with audio.

Make sure you use the safe sources for surfing. Click here for related options.

To utilize Discord screen sharing, first, connect to a server’s voice channel. You may then select to join a video call or share your screen. (If you select a video, you may also switch to showing your screen during the video call by selecting the screen button.) Discord will then ask you to select which application or screen you wish to “go live” with.

Your Discord stream can have up to 25 people join it. Simply click the video button to return to showing webcam video while sharing your screen.

Users could previously only show their screen in private calls, but that is no longer the case thanks to Discord’s Go Live functionality. When you go live, you effectively begin broadcasting your screen to everyone in the same speech channel as you. 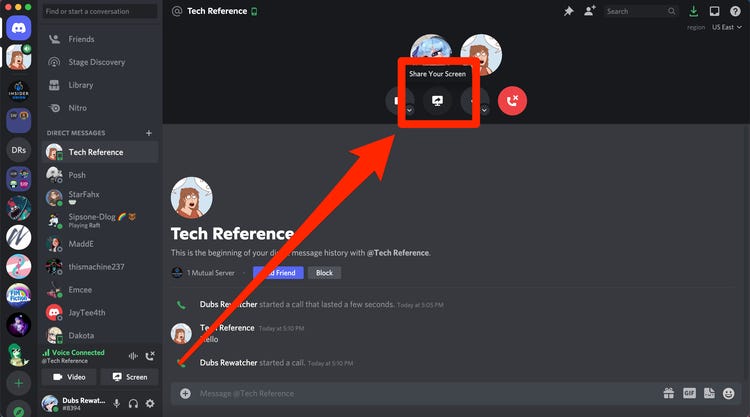 Users who wish to see your screen must join the voice channel, which means you’ll be able to see everyone who’s tuned into your stream.

According to techstry If you want to spectate someone’s screen who is live-streaming/sharing their screen, you must first join that channel. After that, click on their username, and their live stream will show in a tiny form to the right. If you click on their live broadcast, you’ll be able to watch in full-screen mode.

How To Screen Share In Discord Server On A Private Call?

While the majority of Discord users spend their time on servers with hundreds of other people, you may also initiate private audio calls with your pals. These calls are invitation-only, so one of you will need to invite everyone who wishes to join the call.

The methods described above will allow you to share your screen on both Windows and Mac computers. You won’t even need to download Discord to begin live streaming your screen because its online version contains the same features. However, it is not as simple as it seems for mobile devices, and mobile users had to wait a long time to be allowed to share their screen on Discord.

The functionality will be available on Android and iOS smartphones by the end of 2020, allowing mobile users to join in on the fun. In a private call, here’s how to screen share Discord server:

How To View Live Stream On Discord?

If you are a member of the same server as someone else and wish to see their Discord screen sharing, you can join their live broadcast. Go to the voice chat that they are in and click on their name to do so. If they are currently screen sharing, the Go Live symbol will appear next to their name.

You can speak chat with the streamer and everyone else on the voice channel while watching the live stream. You may even join another person’s live broadcast while sharing your own. On the Discord app, users may move between several Discord displays. Though you cannot see your live broadcast and someone else’s at the same time, you may easily flip between the two, allowing users to collaborate on projects from a distance.

This allows you to Discord screen share audio even if you missed the live stream.

Another extremely useful feature offered on Discord is the ability to go live while playing a video game. The entire program was almost designed to be a way for anyone who enjoys playing games to share and discuss their experiences with others. One of the greatest methods to do so is to live-stream your gameplay while playing a game!

Discord includes a feature that allows users to stream their gaming to friends or other strangers who may be interested in watching. This feature is useful, but it is not as useful as you may expect. That is because there will inevitably be some difficulties with it at times.

These problems prohibit it from operating, thus they must be resolved as quickly as possible. If you’re one of the many individuals who are having trouble getting Discord’s Go Live function to operate, here are a few things you may try to fix the issue of Discord “Go Live” not appearing:

Before you begin debugging and working hard to determine the source of the problem, it is strongly advised that you first review the Discord settings. There are several instances where the Go Live feature is not enabled for accounts. This is true for the vast majority of accounts because the functionality must first be explicitly activated.

If you are facing the issue of Discord screen share audio not working, then you can try permitting solving this problem. You won’t be able to acquire it if you try to utilize it while it’s disabled. To activate the function and make it operate if it is currently disabled on your device, go to the Server Settings and enable the Go Live feature.

The only difficulty is that you won’t be allowed to do so unless you own a server, as only the server owner decides who gets to broadcast on it.

When you try to utilize Discord features that haven’t been updated, many of them don’t operate properly or at all. This is a frequent issue with any program that employs network functions and must be updated. The answer is quite easy: simply go to the official website and download the most recent Discord version available.

Another option for resolving this issue is to remove the whole application from your device and reinstall it. These are excellent methods for reactivating the Discord Go Live functionality.

It’s very conceivable that Go Live isn’t operating on your PC because it can’t. To be more exact, your PC may be just not capable of utilizing the function. Live streaming places a significant burden on computers, and those that are too weak will be unable to operate it correctly, if at all.

Make sure your PC is capable of running the function by conducting some internet research depending on your PC’s specs. Once you’ve determined that your PC’s inadequacy is the cause of the Discord Go Live feature’s failure, you’ll need to make some changes if you want to live stream your gaming.

The ability to share your screen with others, allowing them to view the games you’re playing or the software you’re using is a handy feature of Discord. However, many users, particularly those running Windows, report that Discord screen sharing does not work. This is because the screen share window may occasionally display a blank screen instead of the game.

Don’t worry if you’re one of these users. This section contains a step-by-step walkthrough of solving Discord share screen issue.

Discord does not yet allow full-screen application sharing. Users can only share screens that open in a new window. As a result, check to see if the game you’re playing is in full-screen mode. If so, go into windowed mode and re-share your screen on Discord.

2. Close All The Third-Party Processes

Running an advanced game with the Discord client when other programs are running in the background can sometimes cause speed difficulties, one of which being the Discord screen sharing not working. Here’s how you can fix it for an excellent Discord share screen:

To add a game to Discord, follow these steps:

That’s it; restart the screen sharing to ensure everything will operate properly. It is important to note that Discord will automatically search for and show the game name. You may, however, manually add it by clicking on ‘Add it!’ > Enter the game’s name > click ‘Add Game.’

In the left sidebar of Settings, select ‘Overlay.’
Enable the ‘Enable in-game overlay’ option. You may change the size of your avatar, display names, display users, and notification position in-game.

If you run a lot of apps, you’ve probably encountered a caching issue before. A similar caching issue is frequently the blame for Discord’s screen sharing not working. As a result, you can try deleting the Discord cache folder. Here’s how to do it:

4. Run Discord As An Administrator

This may appear to be a simple remedy, however many users fail to allow the Discord client administrator privileges on their PC. As a result, ensure sure Discord and the game are both running as administrators. Here’s how to go about it for doing Discord share screen properly:

Discord is a fantastic chat software for gaming with your pals or working on a big project with your team. Discord is a wonderful all-around communication software because of its sophisticated functionality features such as custom servers, voice channels, and a high degree of customization.

Discord is capable of much more than simply sending basic text or voice messages, and one particularly useful function is screen sharing. If you’re a gamer, screen sharing allows you to live stream games to your pals, and it may also be a useful tool for brainstorming or presenting ideas to your team.

So, learning Discord share screen gets more important than ever.